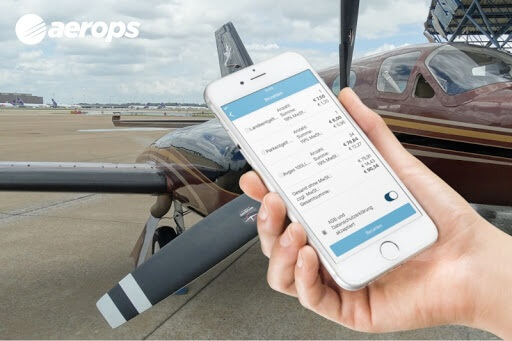 aeroPS GmbH is expanding its portfolio offering and from Spring 2020 will enable all pilots not only to pay their fuel bills via the aerops app, but also give the ability to activate fuel terminals. This makes it the first app provider in the world to make this possible. The new feature will be officially presented to the public exclusively at the AERO in Friedrichshafen from April 1 to April 4, 2020 at the company’s booth in Hall 4, No. A4 – 506.

Payment of landing and parking fees via the aerops payment app has been possible since the app was introduced in 2018. Since last year, it has also been possible to pay for other services such as IFR approach charges. Up to now, pilots have only been able to pay their fuel fees with credit cards, cash or a direct billing account. With all these variants, however, pilots still have to go to the responsible employee of an airport or airfield to make the payment or inform the airfield that another service is to be charged to the bill. Also, many fuel terminals have to be activated before being used.

At some airports you have the option of purchasing a fuel card, but this can limit the ability of a pilot to only pay at certain airports that accept the fueling card. With the new feature from aerops, all fees including fuel can be paid comfortably and directly, regardless if you have a fueling card from one fuel company or another. The aerops application also gives the pilot user, the ability to unlock a gas terminal without having to look for ground staff to activate the fuel tank.

No longer does a pilot have to think about which airport he or she can fly to, to fuel up. For the airport, all payment information is transmitted in real-time and the pilot user receives their invoice directly via email. The entire payment process is paperless. Initially, the new app feature will be available at aeroPS partner airports with their own fueling facilities and also at airports with mobile fueling solutions, such as from Maul-Tank from Saxon, Germany. aeroPS GmbH is in discussions with filling station providers of large oil companies and other smaller local providers.