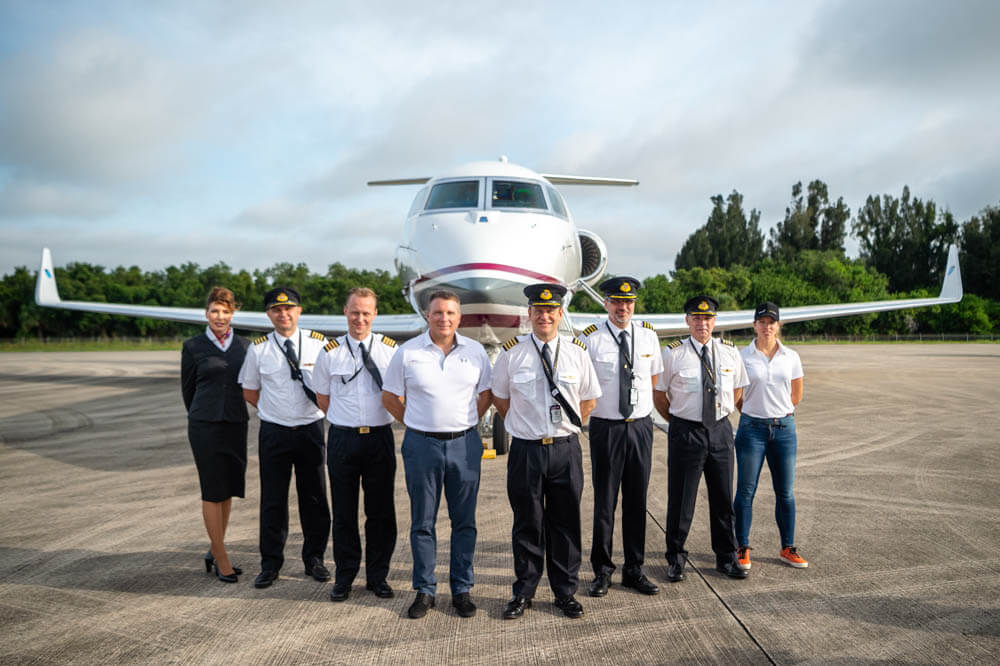 Action Aviation chairman Capt. Hamish Harding, Col. Terry Virts and Qatar Executive are now officially certified by the Fédération Aéronautique Internationale (FAI) as setting the record for speed around the world over both the Earth’s poles, in addition to 12 other Speed Over Recognized Course records.

“We’re thrilled the FAI has ratified our record,” says Harding.

“Having the One More Orbit mission officially in the books with the most prestigious flight authoritative body is an honor for myself, the team and for our attempt to pay homage to Apollo 11.”

“The successful accomplishment of this mission has been made possible thanks to a meticulous preparation on all levels, throughout all departments of Qatar Executive. Thanks to Qatar Airways’ network around the world were we able to prepare every fuel stop efficiently and swiftly, which was a major component in improving the set of records. We wrote history during that mission, something that will remain in the books for a long time. It is an exciting feeling to have mastered the challenge through excellent teamwork and using the right equipment,” says Ettore Rodaro, Executive Vice President of Qatar Executive.

The previous record, set in 2008 by Captain Aziz Ojjeh in a Bombardier Global XRS, stood at 822 km/h (444 knots, 511mph). Ojjeh completed the polar circumnavigation in 52 hours and 32 minutes.

In addition to the main circumnavigation record, One More Orbit also set records for:

●      From the Kennedy Shuttle Landing Facility to the North Pole

●      From the Kennedy Shuttle Landing Facility to Nur-Sultan, Kazakhstan

●      From the North Pole to Nur-Sultan, Kazakhstan

●      From the North Pole to Port Louis. Mauritius

●      From Nur-Sultan, Kazakhstan to the South Pole

●      From Port Louis, Mauritius to the South Pole

●      From the South Pole to the Kennedy Shuttle Landing Facility

●      From Punta Arenas, Chile to the Kennedy Shuttle Landing Facility

One More Orbit previously received the GUINNESS WORLD RECORD for the fastest aerial circumnavigation of the Earth via both geographical poles, at 46 hours 40 mins. Flight attendant Magdalena Starowicz and payload specialist/livestreaming cinematographer Jannicke Mikkelson, FNF are also recognized as the first women to achieve this triumph.

“One More Orbit is much more than just a world record: it is an adventure unlike any other. Celebrating Apollo’s 50th and Magellan’s 500th anniversaries,” says Virts.

“we did something that had never been done before, with an amazing and engaging international crew.”

Virts, a former International Space Station Commander and filmmaker, worked with producer Jim Evans and mission partner Untitled Inc. to create a documentary about the One More Orbit mission, which is due for release later in 2020.